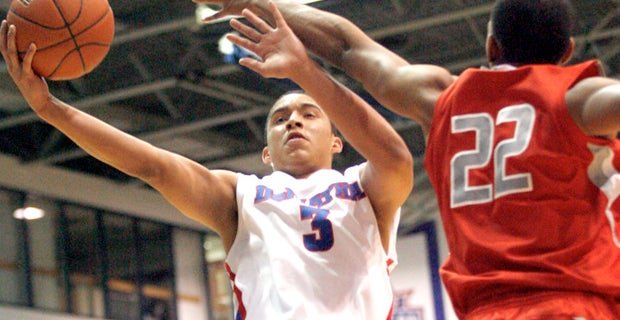 With only 4 seconds left in the 2012 WCAC Championship game, we found ourselves down one with the ball at mid-court.

If we score, senior James Robinson will become the first player in conference history to win 4 consecutive championships… in a conference that ESPN ranks #1 in the nation.

And while be down one with 4 ticks of the clock left is certainly not an ideal – I still liked our chances.

You see James Robinson was, without question, the best leader I have ever coached. Was he the best shooter? Nope. Best ball handler? No. Most athletic? Not even close.

But he was absolutely the best leader… and not coincidentally… a winner.

With 4 seconds left in his high school career,  James had already won more games – 120 – than any player in the history of DeMatha Basketball.

Coach Jones wisely called a time-out to calm the troops, strategize, and set up a play for James to take the last shot. It was a play that we had run successively dozens of times in practice… so buy-in and believe-in were unparalleled.

Just as scripted, we successfully inbounded the ball to James… 4 seconds left… he ripped it across his defender and drove toward the lane… 3 seconds left… he got a few feet past the free throw line and elevated to shoot…2 seconds left… he shot the ball on balance and with perfect form… 1 second left…

The ball hit the front rim and fell short.

The other team’s fans stormed the court in celebration.

James instantly collapsed and was inconsolable.

To this day, I have never seen a human being as emotionally distraught as James was at that moment. He was sobbing.

He felt he let his teammates down.

He felt he let his coaches down.

He felt he let DeMatha down.

After Coach Jones addressed the team for the final time that season, James, all 6’ 3” and 210 lbs. of him, sat on the court for two hours in tears.

Now, I realize there are much bigger losses in life than losing a game. But you have to view the world through James’ lens. He was 18 years old. He had spent his entire life preparing for this moment… and it wasn’t the ending he had dreamed about. His heart hurt.

Do you know what James did the next morning?

He arrived at the gym two hours before school started – keep in mind the season is over – and reenacted that exact same play until he made it 100 times.

He moved to the Next Play.

James made the decision to not let that missed shot define him or cause him further unhappiness.

You see, you will have hard times.

You will face adversity.

You will have varying levels of challenges, set-backs, and tragedies.

And your success – and happiness – hinges on your ability to bounce back.