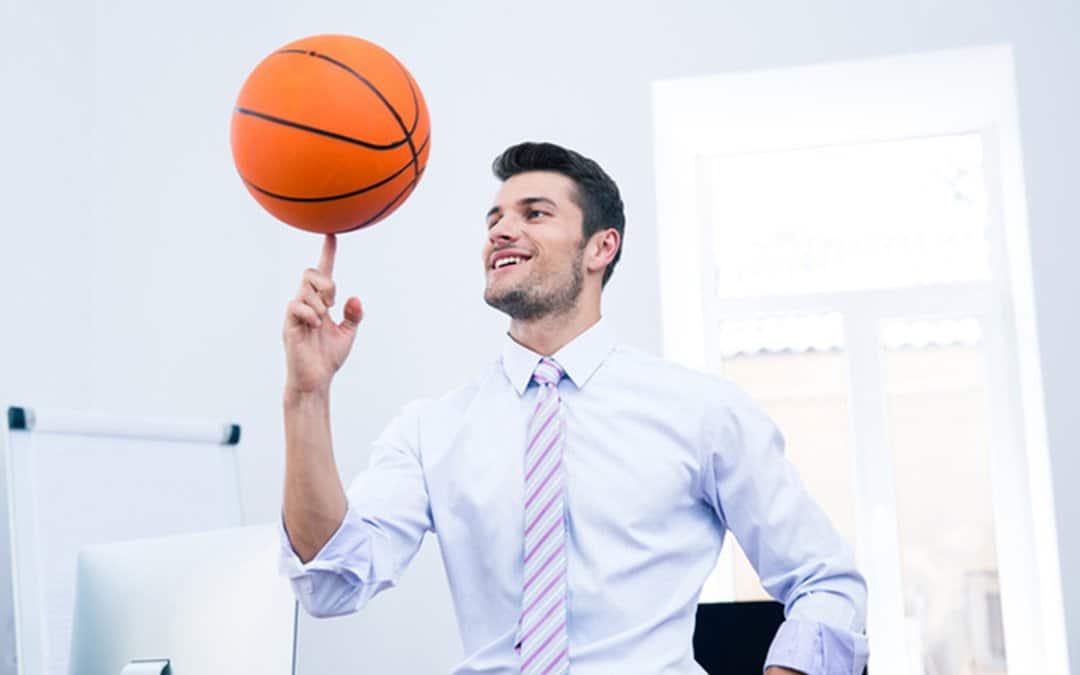 I have been incredibly fortunate to try a variety of different sports and activities in my life. Everything from martial arts to your conventional sports like football had an effect on me. And while I’m thankful that I tried everything, I always came back to basketball. That was my number one passion. And, even though I  realized that the end of college that I was not going to be able to continue to play the game professionally, but I knew that I wanted to make my living in the game. I didn’t have too many options. But I gambled with professions and became a basketball performance coach. And I specialize mostly the youth and high school age, and had an absolute blast teaching players how to improve their athleticism, their mind body connection, and their movement efficiency.

I did that for almost 20 years before making the pivot over to the corporate world. And that’s what I do now is I teach businesses, leaders, sales professionals, and entrepreneurs how to use the same strategies that elite basketball players and coaches use for them to perform at their highest level in their respective fields. And part of my journey, which was really pivotal, was that I got opportunities to observe firsthand and work with many of the games’ best players and best coaches. And I was able to be a fly on the wall and really soak up their habits and their rituals and their routines and the things that they did during the unseen hours to perform at a high level. And that’s what I translate to business now.

So how does one take what you can learn from athletic performance and transfer it into the corporate  world?

First and foremost, I think it’s important that, that most people broaden their definition of performance. Most people, when they hear the word performance, they relegate that to athletics. But I want folks to realize that we all perform in every area of our life, in everything that we do. We perform in our businesses. We perform as husbands and wives, and mothers and fathers. We perform in our community. Everything we do is a performance and when we can improve the way we perform in these different areas of our life, our confidence goes up, and then it begins this circle. When our confidence goes up, we continue to perform at a higher level. So these traits that the athletes use to perform well on the court absolutely translate to every single area of our life, specifically business.

Take someone like Aaron Rodgers. I don’t know Aaron Rodgers personally, but I can guarantee you that he has an unparalleled level of preparation going into a game. Not only the potential place that they’ll call and the routes that his receivers will run, but also studying the different defensive schemes that he’ll be facing. I would imagine is spending hours and hours in the film room studying what the opponent’s going to do. And then, of course, he’s got his own practices and his own workouts and he’s got make sure he’s hydrated, eating well, doing his strength and conditioning, and his stretching. So he’s putting in, you know, a tremendous amount of work during the unseen hours, which will then lay the foundation for when the kickoff happens on Sunday. And that’s what everybody sees. But we forget about all of the work that goes ahead of time.

it’s the same situation in business. If you’ve got a big sales presentation and you’re making a proposal, that’s kind of your game. The success of those things are completely determined by what you did in the proceeding unseen hours. I’ve learned that the highest performers are sticklers for proper preparation and getting in their reps and doing everything within their control to put them in a position to be successful. And in the case of Aaron Rodgers, he may have missed a couple of throws and because he’s such a great leader, he’s willing to accept that responsibility and almost take the blame for himself. That’s just sometimes is the way the ball bounces. I can almost promise you that him missing those throws had nothing to do with lack of preparation. That he crossed every t and dotted every i. Sometimes you just don’t make the throws. Sometimes you don’t, but it’s not for lack of preparatIon, not with a high performer like him.

During those unseen hours, the components of success lie in our habits and routines.

Whether it’s sports or business, it’s not a result of what we do occasionally. It’s a result of what we do all of the time. It’s accumulation of every little decision that we make, making sure that you have the systems and the strategies and the habits in place to be successful in business. That is your foundation. Once you have that in place, then we move into that next step of being able to prepare. Then, the big one – gaining the ability to live in the present moment.  You can’t worry about the past.

The best business leaders I’ve ever been around created is this live, present mantra. They want everybody on their team focused on the present moment because it’s the only thing they have control over. They put their emphasis on their own attitude and their own effort because those are the two things that we have 100 percent control, over 100 percent of the time. When you can learn to focus on what you can control as opposed to being worried and anxious and distracted by what you can’t, then again, you’ll see your success and your performance and your achievement go through the roof.

And the biggest habit you should be building…

Get back to the basics.

It’s not flashy or sexy. It’s not that shiny object that everyone wants to chase.

I’ve learned from the highest performers that the best never get bored with the basics. So the first thing anyone in business needs to do is they need to figure out what are the most basic components of what they need to do to master their craft and to be successful. They need to make sure that they never leave those. The hard part is the basics are usually monotonous and often mundane, but they’re the foundatIon to which everything else is built. It’s why a player like Stephen Curry or Kevin Durant continues to work on their footwork even though they’re NBA champions and basketball stars. They’ve received every award one can receive, yet they still take the time to practice basic footwork because that’s the foundation to which their whole game is built.

A good example of a skill like this in business is active listening. You want to listen to learn, not listen to talk. It’s a great way to build a bond and a connection because it shows tremendous respect. Ultimately, that’s the whole point of listening is to create a strong connection, to establish trust, and build that rapport. What could possibly be more important for a leader to build trust and rapport and connection with those that they lead? What could possibly be more important for a sales professional then to build trust and authentic connection with the person that they’re trying to solve a problem for?

I, personally, have had to work hard to build those habits, set routines, and practice those skills that make someone successful. When I was 21, I was incredibly outcome focused as opposed to being processed focus that I am now. It’s taken some practice to get there, but all I ever saw was the finish line,the end result, or the numbers on the scoreboard, and not looking at or having a respect and appreciation for the process of what it takes to get there. As soon as I became much more process focused and focused on the things I could control what I need to do today to get me just a little bit closer to one of my goals, I started getting better outcomes.

Like in sports, don’t worry about winning the game or even about the next play. Worry about making sure your team takes the highest percentage shot possible. That’s all you have to worry about. Nothing else matters except that. Then when we go back on defense, let’s try and force them to take the lowest percentage shot possible. If we do that for most of the trips down the court, we will win more times than we don’t. The outcome will take care of itself. And to me that Is absolutely the biggest difference between the 21 year old Alan and almost 43 year old Alan.

Another skillset that business leaders should continually practice is humility.

You have the humility to realize that you still have more to learn and that you know that you are not bigger than the team,the program, or the business itself. And I think that’s incredibly important and humility. It seems to come with age and experience because as we continue to grow older and have all of these different life experiences, we realize that there’s a lot of people out there that that do an amazing job at what they do and you’re not better than anybody else.

Just focus on what you can control. Stick to the process. And when this is supposed to happen it will happen.

I love my work. I love meeting and connecting with people. And I feel like I have learned so much from these high performing athletes. The ability to pass these lessons onto others in the corporate world is a blessing and one I wouldn’t have had I not built my foundation by establishing good habits, practicing important skill sets, and focusing on the present.